Mark Pearson is one of Copeland Park’s most established tenants. He has had a studio in the Bussey Building for 15 years seeing Peckham go through many changes in that time. Mark has documented these changes through his paintings which often tend to feature Peckham & the people who live here. He participated in Peckham Festival 2016 and lucky for us Mark is back again this year with another Open Studios and Workshop! The workshop asks the question: How does the novice or experienced artist tackle the portrait? Mark will initially show by example how this can be achieved stage by stage. Then the participants will join a small group and working in either charcoal or pencil they will produce their own drawing. Mark will guide the process, teaching the size relationship of the features and the way the light falls on the face to obtain a resemblance of the subject.

What was your favourite thing about Peckham Festival 2016?
That a huge number of people came from all over London to see what we achieved: a fabulous weekend of entertainment reflecting what a great place Peckham is to live and work in.

Can you tell us a bit about your involvement in the festival?
I took part in the ‘Reflecting Peckham’ exhibition in the Copland Gallery and the Open Studios. I also ran a workshop ‘How to Start a Painting’

What was the idea behind your workshop?
The idea was to give a lesson on what to select when starting a painting as this can be quite daunting for novices and experienced artists alike. We also looked at the problems of size relationships, perspective and how to put figures in a landscape.

What do you love about Peckham?
The collective feeling of a genuinely diverse community that appreciates its uniqueness and the importance of keeping this.

What were the best things about taking part in the Festival?
Having the outside world enter into my studio, a place that is usually private and closed. I have exhibited in my own home and in galleries for years, but this was the first time I had the general public in my work space . It was also great to see the work of other artists in the Bussey community.

Will you be taking part this year?
Yes, I will be taking part in the Open Studios again and I am thrilled that the festival organisers would like me to run another workshop. This year I am planning a mass portrait class!

What else have you got going on at the moment?
I am working on several private commissions and I have been asked to take part in a charity auction for Article 25, this will involve a landscape piece of work in the Stratford area. My wife and I are also working with Peckham Levels with a view to teaching art classes in a space there when it opens this Autumn. 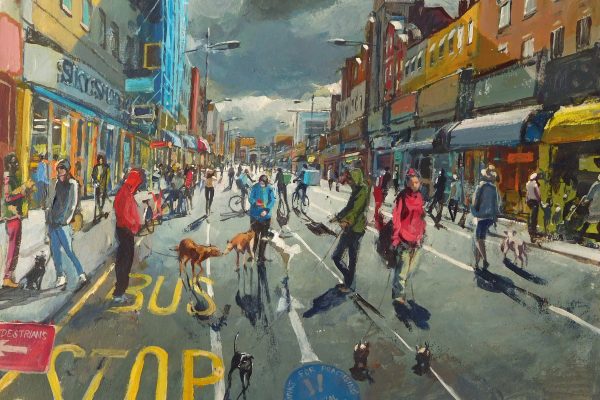 To find out more about Mark’s involvement in Peckham Festival 2017, you can have a browse here.