Eleanor Wemyss is an artist working in a shared studio in the Bussey Building. We chatted to her about her artwork, community & Peckham, as well as her experiences with Peckham Festival Open Studios in 2016:

For those who don’t know you, please can you describe what you do?
I am a practicing artist, using pen and intricate lines to translate concepts and methods from different industries, like engineers, architects, perfumers and music producers. The works are then displayed in situ in large series of works that connect together.

Can you tell us a bit about your projects where you work with communities?
My last project was with a music producer (Johnny Fever). The idea behind the project was to look at his production techniques and find a way of breaking this down to the public and local communities so they get a grasp of what exactly is music production. So the 32 pieces had an element of the album covers sampled from as well as 1.5 seconds of sound wave that he had taken from the tune and manipulated, this is kind of like a puzzle hence the name Puzzlebeats.

A more engaging project that I am working on is my perfume project. This is comprised of 50 coloured panels each with a background colour representing raw material and its corresponding formulae bond drawn on top. There is no key and the participants are invited to choose three colours that they are drawn too without knowing what they represent, and are then taught how to fuse these together to make a perfume. The idea is to show different communities two things, first of all how science is relevant in all day to day things that we enjoy but also to show the relationship we have with our senses and how they are all linked.

These workshops will hopefully help to make what initially appears inaccessible and complicated, accessible and encourage communities to branch out into these sometimes closed off industries.

What is your favourite thing about Peckham?
The community, I have been hanging around Peckham since an early teen and the community is what initially drew me here, there is such a vibrant culture embedded in Peckham’s history and with that comes a diverse mix of people that sets it apart. The buildings have a huge history, and so far they are being used for really great things, it has also become a fantastic creative hub since the late 90s and that is the basis of all the exciting projects being produced out of it.

What was your favourite thing about being a part of the Open Studios last year?
Meeting people, I was so impressed with the amount of people who actually wanted to talk to me about my work in a really engaging way. It gave people a chance to see what goes on inside Bussey. There were also people who were completely unaware of us and they were so responsive to the work in the studio and everything else going on. I have made connections with some great people and it particularly helped having a beer to offer to get them to stick around a bit longer for a chat.

Did you face any challenges?
I would say the main challenge was the sheer volume of visitors, everyone was very respectful of it being a work space but it was non stop, I had to ask people to leave once or twice to take a break.

What have you got going on at the moment?
I have just finished my recent collaboration Puzzlebeats and am working on a private commission. Then in August will be showing some brand new work in Super Yonic that completely strips back what I have been doing over the last few years, concentrating directly on the beauty of the line along with scale.

Apply to be part of the Open Studios programme here. Application deadline in end of June 2017. 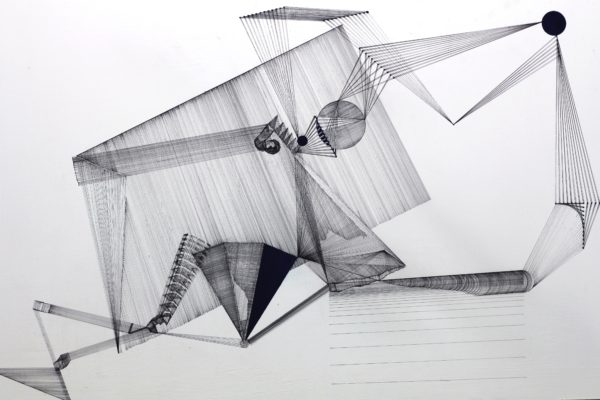