James Pegg of JDP Ceramics is a ceramicist based in The Arches Studios over on Blenheim Court. We caught up with him to chat about Peckham, being a creative and taking part in this years Open Studios.

Could you tell us about yourself and what you do?
I am both a ceramicist and Course Leader of a Fashion Design course at London College of Fashion. I very nearly chose a path into ceramics after school but pursued fashion and textiles until a couple of years ago when clay came back into my life! My textiles background is still a huge influence on me, my ceramics are made using a technique I call Action Casting where the process becomes a major part in the creative outcome. Beyond the choice of colours, the expressive movement has a hint of wabi-sabi influence, allowing whatever happens to happen. The decoration is ultimately embedded in the body of the pot rather than surface glazing so is reminiscent of fabric printing techniques.

What are some of your creative influences?

I think being a lecturer is the most wonderful way of being constantly inspired – and challenged. Working with such a diverse group of students allows me to see odd mixtures of references all the time. More embedded influences would certainly be many of the Abstract Expressionists, Franz Kline and the like – plus more modern examples of this such as Jochem Rotteveel – an artist that uses tape and unconventional materials.

What is your favourite thing about Peckham?
We moved from Hackney a couple of years ago, and still miss it very much, but the first thing that struck me about Peckham was the greater sense of community, we very quickly got accepted into this – especially in the Arches Studios where I am based. There was nothing to prove which was refreshing coming from a fashion background. We don’t regret the move in the slightest and Peckham has brought out a new side of my work, something more energetic and spontaneous.

Why did you want to take part in Peckham Festival’s Open Studios?
Open studios are always a unique event, there is a sense of both excitement in letting people into your space, yet at the same time a vulnerability of exposing the humble setting in which we all create. Also spending time with the studio family and catching up as we do not always get to see each other as much as we would like.

What have you got going on at the moment?
I have been working on some new shapes for the summer season! Being a keen gardener, when I get the time, plants absolutely inform so much about my spaces, so naturally my work is about letting people have plant vessels that are a work of art in themselves. We are also planning on having a florist friend of mine come and plan something in the Arches over the weekend! Crossing the line between artistic merit, form and function is always a juggling act. The uniqueness of each piece of work I create is part of it for me – the use of mass produced shapes but with an individual personality has always struck a chord with me. So every day in the studio is going to produce something I have never seen before. 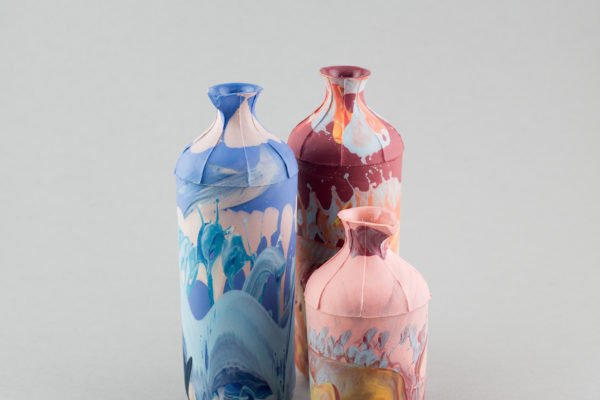 Arch 226, Blenheim Arches
James's work encompasses his experience in the field of fashion design.
From past Festival

Applications for Open Studios have been  extended, apply here to be part of Peckham Festival 2017.