2017 has been a very important year for the LGBTQ community in the UK, marking the 50th anniversary of the partial decriminalisation of homosexuality. It has been a year of events and exhibitions looking at the history of LGBTQ culture in the UK. This year’s Peckham Festival is set to mirror that spirit, with a host of programmed events taking place this weekend!

The Rumpus Room is taking the Festival by storm with an eclectic line up of performers, workshops and talks! Joining them will be London based photographer Marc Vallée will be in conversation with the editor of HUCK magazine. They will be discussing Marc’s work including his latest zine Documenting Thierry on the life of the French male sex worker and political activist Thierry Schaffauser.

Jay Jay Revlon will be giving you life Saturday afternoon – come down and put your skills to the to test in his Free Vogue Workshop and mini battle. Jay Jay Revlon of Kiki House of Tea continues to perfect his craft and help support and develop the ballroom scene in London. Dedicated to ballroom, its history and culture, Jay Jay continues to grow as a voguer and contributes to London and Europe’s ballroom community.

Killing it over in Copeland Gallery is BBZ a South London based art and music collective centring femme identity & eradicating misogyny for queer women, trans folk and non binary people of colour. ‘What You Sayin’ BBZ?’ is a collection of messages, letters and musing from various queer, trans and non binary people of colour. They’ll be exploring how this Black British colloquial term is used to address a person’s physical, emotional and mental state at any present moment. Drop by for ‘What You Sayin’ BBZ?’: A Conversation; a discussion amongst various public figures in the QTPOC community. BBZ will also be taking over the decks at hotly anticipated NSF Crxss Platfrxm Sunday night.

Budding artists will wanna pile in early for a life drawing class with a twist! Join Chloe Myndiuk and drag artist/model Kevin Le Grand. Expect Scouse Punch and Judy but more drawing less madness, with a live performance from Kevin himself! Peckham based poet Ian Turner, will be exhibiting his work, which tackles the issues faced by the modern gay man. Southwark LGBTQ Network and Metro Charity, will be on site at the Nines all day to discuss their advocacy, sexual health and offer advice. 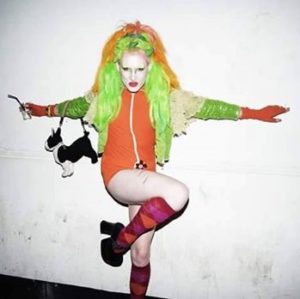 Fresh from her successful debut at the Edinburgh Fringe with Albrecht Dürer: Renaissance Dude, local art historian and comedian Kitty Walsh will be joining us in the Rumpus Room! Kitty will be delivering a talk on Albrecht Dürer, the renaissance era’s most progressive artist. Kitty will focus upon his sexuality and gender politics, exploring sexual ambiguity and the use of homo-eroticism in his work – ideas which were overlooked by future generations.

Last but not least FRUITÉ are returning to this year’s Peckham Festival to celebrate their 1st birthday! FRUITÉ is a series of South London LGBT+ parties, open to all, in a completely relaxed environment where you can be your fruity self. They’re taking over both rooms of the NINES for a DAY party with lots of dancing. Come hang out, have a dance in a  welcoming space for everyone to enjoy.