On Shiny Dog-Poop: Gentrification in Peckham

Growing up on the North Peckham estate in the early nineties were fun, exciting, scary at times; it was our tepee, our camp-ground, our empire; it was a jungle in Timbuktu – not knowing of course where Timbuktu was or even if it had jungles. The weekends were the one! Sweet reggae blasting out of windows, the soulful rhythm of Afrobeat playing out of others, cars going by with the best underground stations playing a banging garage or jungle tune.

North Peckham estate was also broken-down. There were a lot of gangs around, there were stabbings and robberies. The estate was designed by some genius in the 60’s, which ended up leading to an area that even the police refused to come in. Takeaways wouldn’t deliver here because it was too dangerous. There were squatters in a lot of abandoned flats, who, just for the record, were really hot and French – at least the ones who lived near me were. Graffiti tags were serious then, proper Warriors-style gang tagging. People avoided going out after a certain time at night, because it wasn’t worth the risk. Peckham was honestly a terrifying place at times, and it was in massive disrepair.

But it was still home. As young as I was at the time, I do remember when the regeneration of the five estates – North Peckham, Camden, Gloucester Grove, Sumner and Willowbrook – was proposed. It was suggested that this would reduce crime. But there were some who thought that this was just making the place look new; would it really reduce crime?

There was a story that went round when we were kids that the architects of Peckham committed suicide. Another was that Peckham was built on a mass grave and was haunted by ghosts. I could never tell whether or not there was any truth in these urban legends, but it tells you something about how we felt about our home. We thought Peckham was doomed, as did Southwark Council and the government who were desperate to fix the ‘problem’ of Peckham – especially after the tragic murder of Damilola Taylor. ‘Problem’ families were moved out of the estate and new families brought in to replace them. A number of the remaining pockets of woodland on the estates were dug up and built over. The foxes that once lived there are now homeless, you can see them out every night – whether it be a lovely chat or straight-out fighting I can’t tell you which – I don’t speak fox. My feeling at the time was regeneration meant making everything look nicer while stripping the soul out of it.

It worked, though, because, in 2017 Peckham has become the ‘place to be’. It is hip, it’s happening, it’s in fashion, darling. We have new, nicer houses, and new, more expensive shops. We have modern, cool places to go, like the Bussey Building, Bar Story, Frank’s Cafe, the Hannah Barry Gallery. We have exciting projects like the Peckham Coal Line. We had the council pouring an enormous amount of money into Bellenden Road and it looks gorgeous. We have an expanded UAL, and so now there are load of students.

What is this, gentrification?

The process by which something that was seemingly dog-poop gets polished and done up nicely, and new people move in with the money needed to live in nice polished places, and then that nicer polished place becomes a sought-after address, prices hike up on everything and the original non-polished people struggle to live in new shiny parts and have to move away or huddle in the still-poopy parts.

Peckham is definitely experiencing gentrification. But does it have to be a bad thing? When I asked Pete Kyrke-Smith, a promoter who was instrumental in building this new-age Peckham, he said he’d like to see a kind of ‘moral gentrification’ of Peckham. A ‘gentrification’ that doesn’t subsume the Peckham cultures that are already here. Is such a thing possible? 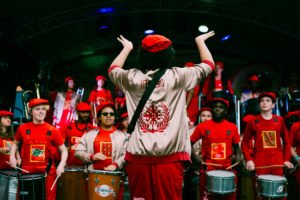 I have thought about this a lot, and I don’t think it is possible. The middle-class are the great destroyers of culture. They don’t mean to be, but they are what they are and what they are is middle-class. When they come to Peckham, they may take an interest in the place, but they will not suddenly become poor. But I’m not saying I think that Peckham’s newfound popularity will be its death. I think it’s up to the locals to speak up and take control of their communities.

When I heard about the Peckham Festival I jumped at the chance to get involved. What I wanted to know was how much the festival was by and for Peckham. How interested were the local folk? Or was it just a bunch of white folk doing white-people things? Was it really the Peckham festival?

I was encouraged to hear, when I spoke to the organisers, about how much work was put into involving the community, from local businesses to charities and voluntary organisations, musicians and artists. I was discouraged when I spoke to my family and friends to learn that none of them had heard of it. Though I know it’s often the case that arty things go unnoticed by the non-arty. And it’s only in its second year. 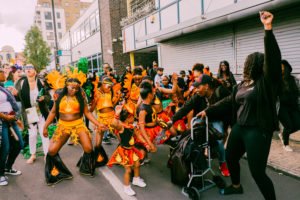 But I needn’t have worried. The festival was a celebration of everything Peckham. The launch night at the Peckhamplex showed videos of Peckham dating back over a century – very pertinent, considering change was on my mind. The weekend had a strong emphasis on people of colour and Peckham’s LGBTQIA+ community, with the gal-dem Film Fest and the BBZ installation, which was a look into the lives of some remarkable queer, trans and non-binary people of colour. Sunday was Carnival, with Holly Grove transformed into a mini-celebration of Caribbean culture; a day mainly hosted by community groups, charities and voluntary organisations. A day that truly appealed to a lot more indigenous Peckhamites with an even more mixed crowd due to the beauty of the music, and real community in Peckham to bring people together. This was the day the Peckham I grew up in was really reflected.

Of course, Peckham means different things to different people and has changed many times over the years. For me Peckham is a melting-pot of culture but in the 90’s Peckham was to the country at large a ‘yoof’-riddled no-go area. In the 1600’s, Peckham was a popular and sought-after location for shopping. In the 1600’s Peckham was ‘the place to be’! So you could argue that the gentrification of Peckham is really a restoration. But all those 1600’s people are dead, and we’re living here. Let’s make sure our voices are heard and our needs are met, because the ‘gentry’ (if you will) in Peckham don’t need our input to change the place. To keep Peckham’s individuality we must stay grounded and refuse to be displaced. To protect established families and community, we need to speak to the council about upholding certain privileges for people who live in Peckham but may not have enough money to continue to live here.

Despite being such a diverse place, or perhaps because of it, Peckham has always had a strong sense of community. I have faith we will work together to protect it.